Many superheroes were created as fictional solutions to the social issues of their time. (Ever wonder why so many heroes gained their powers from radioactivity? Think about it.) Their storylines are dripping with social commentary, which makes them one of my favorite conversation starters when I casually wish to get my nerd on (hint: always).

Fun fact: All A-list superhero characters were created between 1930 and 1980.*

While many of their storylines are still relevant — history, as they say, tends to repeat itself — these characters do not adequately represent the 21st century American people (that is to say, we are not all white and male). A lot of things have changed since 1980: the Cold War ended, computers are old news, and people use this thing called the “Internet” to watch funny cat videos. I’ll admit it. I love the superhero classics: Batman, Superman, Spiderman, and so on. But I believe it’s time for a new generation of superheroes to join them on the superhero A-list. We need heroes we can all look up to and identify with; heroes who look like us, face the same issues we face, and challenge and inspire us to change the world.

Last Tuesday, I enlisted the help of 35 Youth Ambassadors at Seattle’s Cleveland High School to explore what this new breed of superhero could look like. Founded by Lori Markowitz, Youth Ambassadors is an awesome program that allows compassionate teens (and tweens) to act as mentors to younger students, with the goal of reducing truancy and dropout rates.

I asked the ambassadors to pick a real-world issue they are passionate about and then tasked them with imagining a new, fictional superhero to tackle that issue. Let’s take a look at a few of the superheroes they imagined: 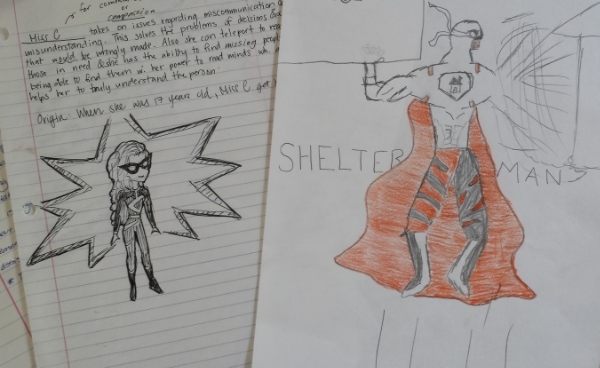 Simply put, I was blown away by the passion, creativity, and awareness the Cleveland High Youth Ambassadors displayed through the characters they created. Imagine Hollywood’s next major motion picture: Mag-Man, Miss C, Shelter Man, and Speedo team up (as “the Ambassadors”?!) to save the world from gun violence, miscommunication, poverty, and homelessness… Now that’s a superhero team 21st century Americans can look up to.

*See this list of superhero debuts. As this information is Wikipedia-sourced, I thought I’d open it up to challengers.

Founder of The Sidekick Collective. - Email